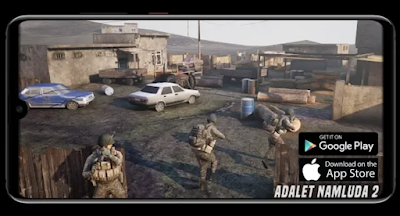 Conflict with Turkish Armed Forces in operational areas as Turkish Military!
The terrains and places where the Turkish Armed Forces Operated were examined and referenced to the maximum extent and transferred to the game completely by using TAF inventories (camouflage, weapon, helmet, steel vest and some ground and air vehicles).
The requests that came to the first game were examined one by one and the game basis was established on these requests. In this way, the game has been moved a few steps forward in terms of graphics and gameplay.

Battle royale survival games have now become popular on both PC and mobile devices. In general, I can think of Rules of Survival, Fortnite or PUBG Mobile, with their high popularity as well as a large number of players around the world. Recognizing the potential market for this genre, game companies rushed to launch products with similar gameplay, allowing battle royale games to gradually become saturated.

So you don’t need to spend time searching for a shooting survival game among thousands of games of the same genre today, I will introduce you to a very special and impressive game named Adalet Namluda 2. It has also launched a demo version so that players can try it out before deciding to pay for the full version.

Gameplay
Coming to Adalet Namluda 2, players will become members of the Turkish Armed Forces and take part in one of the most fierce battlefields in the world. With over 90 different missions spread across 10 maps, players must complete each mission in turn to unlock the next battlefield.

Your task is very simple, destroy all enemies in one mission. The less time it takes to complete it, the more experience and bonuses the player will get. What’s more, players have the opportunity to unlock more weapons and more unique equipment.

Customize Your Soldier
Now, creating characters by naming and choosing gender has become very basic and boring. To further add to the fun, Rigback allows players to shape their character’s appearance in Adlete Namluda 2 to their liking. You can freely choose and customize your hair colour, skin colour, hairstyle or appearance as per your wish. In addition, the game also offers two character classes. If you want to attack like a tank on the battlefield, you should choose Attack Soldier. If you want to be a sniper, Sniper is a perfect choice.

weapons, weapons,
Adalet Namluda 2 aims to create the most realistic and fierce battlefield ever, so the weapons offered by the game are also based on practical design.

In terms of the number of weapons with other survival games, Adalet Namluda 2 is slightly inferior, but overall it is still quite diverse. If seen, it also has most of the weapons which are commonly seen in shooting games. The gun’s specifications, figures and information are shown in full and detail below. You can refer to this before making a purchase decision.

In addition, players can also equip their characters with armor, hats, backpacks. These equipment are not only decorative but also increase the character’s HP and stamina while improving camouflage during combat. Vehicles are also useful for large scale warfare. The tank on the ground is a scary monster. F16 Helicopters or planes are like flying forts in the air!

Control
Like other shooting survival games, the controls are implemented through virtual keys on the screen. If you’ve ever played a battle royale game, the controls in Adlet Namluda 2 are easy to get used to and fast. The layout of Virtual Keys is much better and scientifically designed, suitable for many Android phones and tablets.